Here’s how it came about….

I had been off work from my teaching job since October 2020 whilst getting treatment for breast cancer. For most of that time, England was in some stage of Covid lockdown, so I wasn’t alone in my confinement! My treatment was great, I was lucky to catch it early and for most of the time, I felt well and fine, but appreciated the time to rest and reflect – and would go for long walks around Hove and the South Downs with my friends to get out and talk. During this time I asked my friends to let me take a few photos of them and started making small portraits of them. This felt both therapeutic and celebratory – I was noticing these women in a deeper way and appreciating them with every brushstroke.

Alongside this,  the good people of Sky TV (who make Portrait Artist of the Year) were delivering Sunday morning Facebook Live events (Portrait Artist of the Week / PAOTW). So every Sunday I would settle down with the computer on for four hours as a well known artist painted a celebrity in their own homes , whilst chatting, and every one at home joined in. Efforts were posted on instagram and there was a weekly round up of the best entries.

One week in February, the actor Nicola Coughlan (Bridgerton, Derry Girls) was on and I made a quick 2 hour painting of her and posted it to instagram whilst she was still live on the programme. 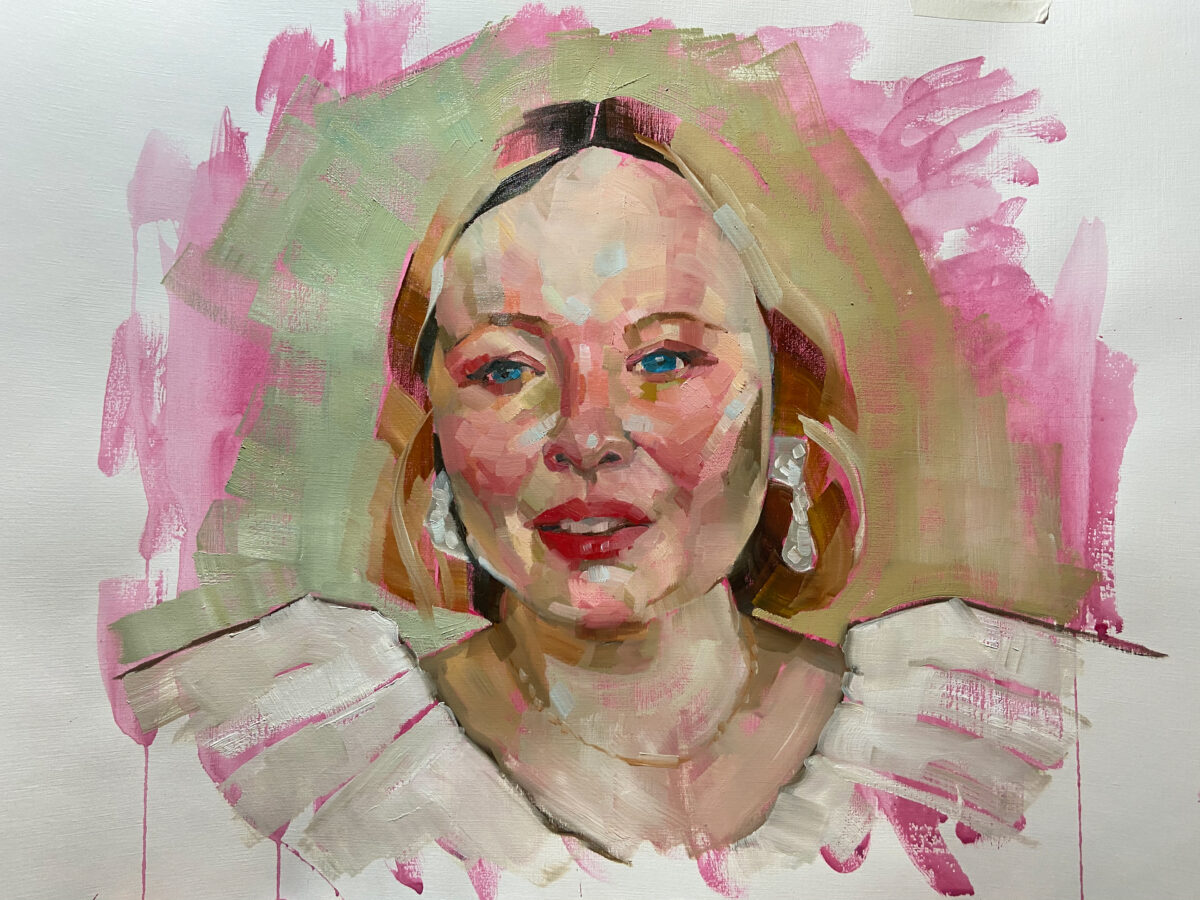 Nicola saw it and showed it on screen, then proceeded to repost it to her million+ instagram followers! This was marvellous and got a few more followers to my account, then I forgot about it.

About a week later, I received an email through my website, professing to be someone from the Tate gallery wondering if I would like to do a livestream painting event for them. I thought eh?!

They said they had seen Nicolas’ post, and then my series of female friends on my instagram, and thought I would be a good fit for an International Womens’ Day event. They had been doing some livestreams with  artists in lockdown, and aimed to be both educational and relaxing for these difficult times. I still think they were taking a risk asking , but perhaps they saw some of my (very amateur) YouTube tutorials and decided I might be ok for it. These things all go to show you never know what might happen and come out of putting yourself out there…..!

I had about 4 weeks to prepare, so set about painting portraits of whoever I could. I made a series of portraits of female artists including Marina Abramovic and Kara Walker, and posted these on instagram alongside quotes and info in the week beforehand.

Here’s me with lights and cameras on a practice run (another PAOTW). Yes this is my studio/dining room! 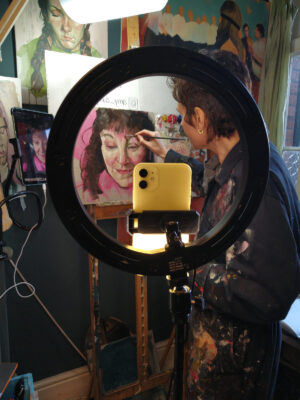 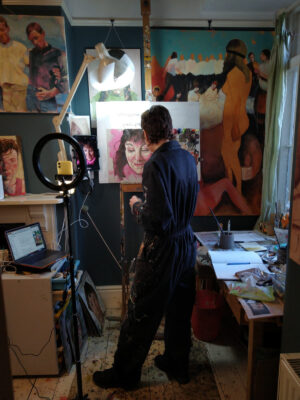 My big worry was that I would be in a blind panic and not be able to make good decisions about the painting, so I developed a way to start which was using a dark colour (a teal blue) acrylic wash, and a grid over the canvas to help me get the features in the right place quickly. I wanted to try and get it done in 2 hours.

The Tate sent me lights and a microphone, and did two practice runs in the week before. I did a practice livestream painting on my instagram account, and a live interview with artist Faye Bridgewater to get me used to chatting on camera. Yes its weird at first – then you just get on with it and get used to seeing your face and hearing your voice. 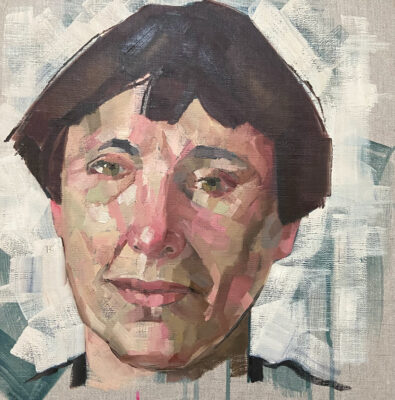 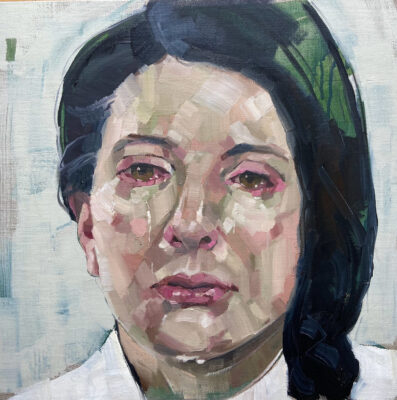 I made notes about things to talk about – I wanted to be very open and talk about anything that came up, including breast cancer. You never know who it may help and I feel life really is too short to be secretive.  And of course I wanted to try and explain the techniques of creating the portrait as clearly as possible, in case that was also helpful to anyone. I cannot claim to have a great technique – there are many ways to paint and this is just one. Some would not like the grid being involved, some would never pre mix colours, there are no set rules!

I began by showing my colour mixing – I had the palette upright next to the painting for easy viewing, and had already mixed most of the colours. I tried to keep a simple colour range and was very into the crimson/sage green combo you cab see above in these two pieces. The green can be mixed with the crimson to create a beige tone – I mixed a large pool of this as the ‘mother colour’, then take bits out of this and add more crimson, or more green, or some burnt umber or white. The palette was : Alizarin Crimson, Cadmium green, titanium white, Burnt umber, with yellow ochre, ultramarine blue and cadmium red used to lesser extent I think.

SO the canvas had a loose, thin wash of blue acrylic, with some splashes and drips, as I like to have the possibility for some of that background to stay in the final piece. I then drew the grid in pencil, and had the corresponding grid over the portrait of Cornelia. Cornelia Parker is one of the foremost conceptual artists in the world today. She selected a few photos of herself that she liked, and I chose the one I felt had good light and shadows and a lovely long neck/tilt of the head. 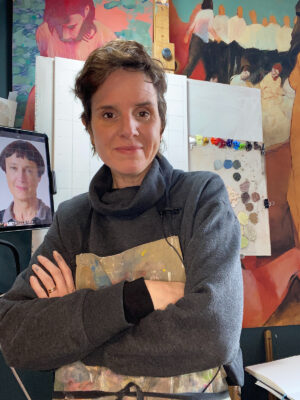 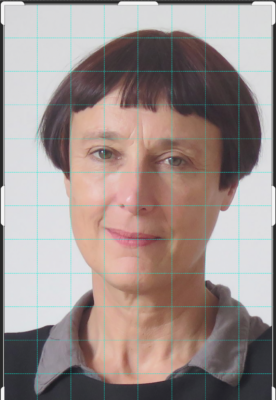 When I pressed ‘Go Live’, I wasn’t sure if it was actually happening, hence the rather startled start, but then I had to put my back to the phone and ignore all the comments coming in and get on with it!

The Tate were feeding me some of the questions through WhatsApp on my other screen ( phone was filming, iPad was showing the ref photo and laptop was showing WhatsApp !). Apparently someone said I was hot, which was nice…..! There were a lot of people asking who I was and what was I doing? (hence my name written below the painting) and lots of wonderful and supportive comments from all over the world. I’ll paste some of these at the end of this post. Cornelia herself said hello and said she felt “in safe hands”.

I was basically talking to myself in my dining room and sometimes even had to shock myself into talking again if I went quiet by remembering what was actually happening! I tried to explain what I was doing every step of the way and interspersed this with chat about whatever came up – how I got the gig, what my background was, the breast cancer,  the friends portraits, etc.

I wanted the video to be relaxing and informative, I know I love watching people paint, so hoped this would be the same. I really did watch some Bob Ross videos beforehand and hoped for the same pleasurable vibe!  I actually relaxed quite quickly and ignored the viewer count (45k) as I enjoyed the act of painting. I think at one point I actually say “Ah. I love painting faces.

I tried to be really brave by putting down large areas of colour quite quickly with a big brush – the piece needed fast impact and minimal fiddling. I even had the photo on a slight blur to take out fine details and stop me from getting too tight. I knew I had a way to start the painting, but after a short while it starts to go in an unexpected direction and without time to stand back and take stock, I was really worried I would make a mess of it. I honestly just relied of my hours of practice and pushed on- it took me a while to adjust problem areas as I just couldn’t see them with the pace I was trying to keep up.

A fun point came when I was about to paint the hair – Cornelias’ iconic dark brown bob- and throw the question out as to whether I should maybe leave it blue? The answers came in fast and from Cornelia herself – leave it blue!

After 2 hours had flown by, I decided to stop the event – the painting was very nearly done and I was exhausted. I spent 20 minutes touching it up then it needed photographing and posting on the Tate feed. 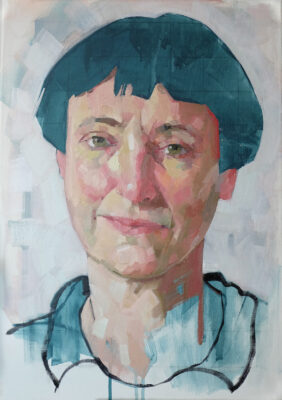 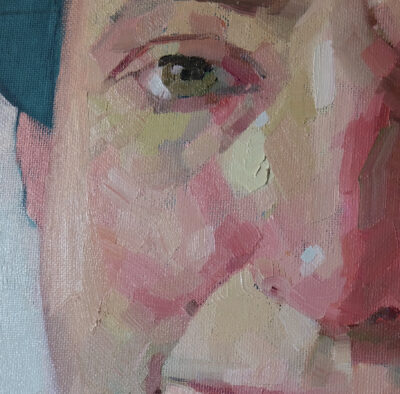 The Tate seems happy. They said it had been their biggest livestream audience so far – but that’s probably mainly due to the fact that I was on air for so long!

I watched my instagram following double from 2k to 4k overnight and spent the next couple of days responding to amazing comments and questions. I also sold quite a few paintings to be shipped across the world, and had some commissions for portraits.

What a great opportunity, it has led me to consider more videos, tutorials and livestreams in the future and given me so much in the way of confidence and connection. It has been viewed 130k time since.

I auctioned the painting off afterwards and donated all the money to Plan International, a charity that helps children worldwide. It was sent to its new home in Sweden shortly afterwards!

The full video is here

A short chunk showing the comments is here

Comments from the livestream:

Fantastic, Brilliant, Amazing. Enjoyed watching all of this so much and related to it on so many levels , too many to mention except the definition of your brush strokes, Wow . Such a skill , and think it enables you to call the painting finished at any time , Happy painting

That was sòoooooooooooo good! I haven’t done this in ages and its really inspired me to turf everything else today and get stuck in.Thanks Tate & Amy. What a gift.

I watched the full video live and loved seeing Amy’s process unfold and hearing her reflect on her choices. Wonderful idea Tate and beautiful execution by Amy ❤️

Watching in California. Beautiful work. Amy is a fantastic instructor and so enjoyable to listen to. The ease and naturalness of her paintings reflect her personality. I’m inspired!

@amy_dury @tate It was an amazing experience for us as well and a perfect International Women’s Day gift. Thank you Amy! Thank you Tate!❤️✨💐🍃